Election results 2020: When will the new president be announced? – Bukipress

THE long wait is over – the US 2020 presidential election is TODAY.

Election day is on Tuesday, November 3, and votes must be in by this evening – but how are they counted?

What happens on Election Day?

The closing times for polling stations vary from state to state and in some cases by town and city.

The first polls will close at 7pm EST.

Following the election, the new president is typically announced that evening when ballots are sorted and counted, although there may be a delay this time around due to increased mail-in ballots during the coronavirus pandemic.

Sometimes the votes are not fully counted until the following morning as there can be problems with the balloting system.

Donald Trump during a presidential rally[/caption]

When will the new US election result be announced?

In 2016 the election was called at 2.30am EST when Donald Trump won Wisconsin pushing him over the 270 votes he needed to win.

However due to increased postal ballots because of coronavirus, a clear result might not be known until some time after Election Day.

Votes will be counted in each state with a running total updated live.

The full count is not expected to be completed on election night but there may be enough to determine a winner.

A state is “called” by major media outlets when they believe one candidate has an unbeatable lead, explains the BBC.

Media organizations declare winners in thousands of races on election night based on the results that are in, voter surveys and other political data.

These predictions are provisional until a result from the mail-in ballots has been determined.

The winner of the 2020 presidential election is scheduled to be inaugurated on January 20, 2021. 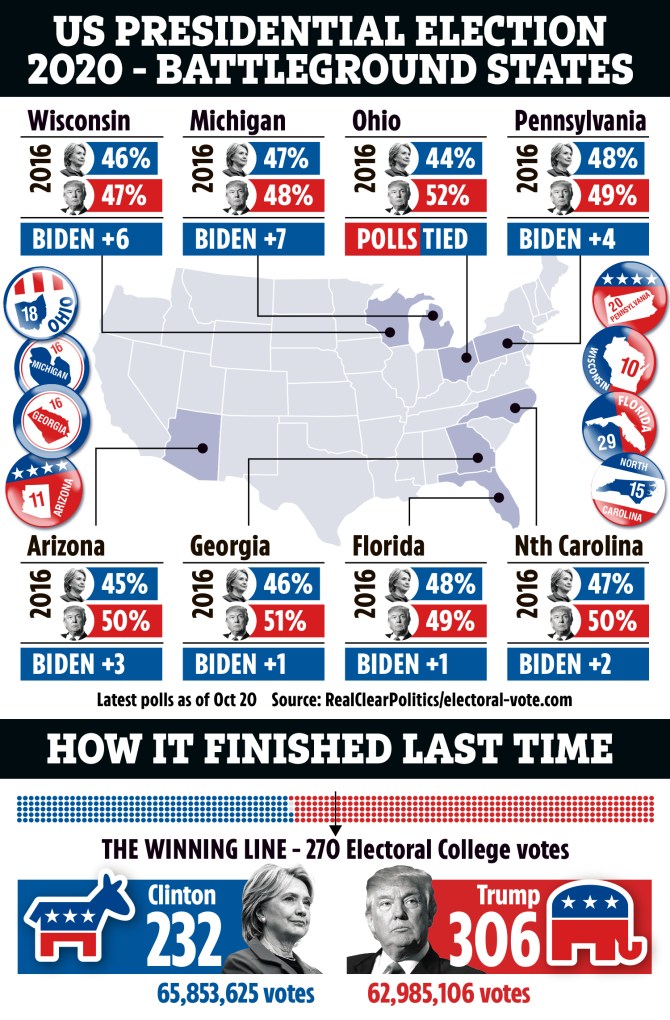 What time will the swing state results be announced?

Swing states are key for either party to win the presidential election.

There are several swing states, that over recent elections have gone both ways.

Of the six swing states, Florida, North Carolina and Arizona are expected to count most of their votes on election night or soon afterwards.

Pennsylvania, Wisconsin and Michigan are in a different position.

Due to the lack of updates on the policies of mailed ballots these states could take days to finish their counts.

Polls are open in all three states from 7am to 8pm.

Votes filled in by citizens are counted as popular votes and do not determine the president’s win.

Instead, the electoral college determines who the winner of the election is.

The electoral college determines the winner of the election[/caption]

What are the latest odds?

Bookmakers have put Republican Trump’s odds of winning the next election at 15/8, according to Oddschecker.

The 74-year-old has seen his popularity slide amid the coronavirus crisis as well as two bombshell reports from the New York Times claiming he failed to pay taxes and also holds a Chinese bank account.

His lead had slipped considerably at the start of campaigning, but he has surged in recent days, particularly in the swing states.

Polls also suggest Democratic candidate Joe Biden is taking a lead in key red states which will worry the Trump campaign after he clinched his 2016 win due to the electoral college.

The former Democratic vice president is the favorite to take the White House at 8/15, says Oddschecker.

Biden has been praised for his ability to win over floating voters in working-class areas, although he has been embarrassed by a number of high-profile gaffes on the campaign trail, including an ongoing investigation into his son Hunter‘s alleged dodgy foreign dealings.

However, the bookies aren’t always correct.

MORE ON THE ELECTION


US Election results map: Expected timings and when each state is due to declare

AND THE WINNER IS


State votes: How many electoral votes does each state have?


Can Donald Trump win the 2020 US election without Florida?

In research conducted in January of this year, Strategas Research Partners revealed that the U.S stock market correctly picked the winning political party 20 of 23 times since 1928.

If the stock market was positive collectively during August, September and October then the incumbent party would hold the White House.