BRITAIN will tighten its borders amid fears over “vaccine-busting” mutant Covid strains from abroad, Boris Johnson has tonight said.

The Prime Minister warned he didn’t want to the “hard work” of the UK’s vaccination programme undone by “the arrival of a new variant”.

He announced during this evening’s Downing Street press briefing that all “travel corridors” would be suspended from 4am on Monday.

The PM warned the country is at a “crucial stage” in its fight against the virus, which has now killed more than 87,000 people in the UK.

“What we don’t want to see is all that hard work undone by the arrival of a new variant that is vaccine busting,” he said.

Mr Johnson added: “At this crucial stage what we can’t have is new variants with unknown qualities coming in from abroad and that’s why we’ve set up the system to stop arrivals from places where there are new variants of concern and set up the extra tough measures that I’ve outlined.”

The PM warned the vaccine may not be as effective against variants from abroad, saying: “Its likely the vaccine we have now is going to protect against the UK variant, and its going to provide protection to the other variants as well, its just to what degree the efficacy might change.”

Sir Patrick Vallance, the Government’s chief scientific adviser, cautioned that some of the new mutations may be able to “get round” the vaccines.

But, he said that it was a “miracle” there was a vaccine at all, adding it is “really quite easy” to adjust the jabs to deal with mutations in the virus.

“It is possible that the variants will get round vaccines to some extent in the future and some of them that are out there in the world now may well have more of an effect to bypass some of the existing immune system that has come up in response to a vaccine or previous infection,” he said.

He later assured: “I think the vaccines themselves … particularly the messenger RNA vaccines are really quite easy to adjust to changes in the virus.”

His comments come as it was reported 11 cases of a new strain of a Brazilian variant were detected in the UK.

The more concerning of the two a ‘super Brazilian strain’ – which was picked up in travellers in Japan – has not yet been found in Britain.

But scientists have confirmed the second worrying mutation has been in Britain “for some time” and detected 11 times so far.

Mutations found in Kent and South Africa raised concerns before Christmas, with the UK variant responsible for a sharp rise in cases. 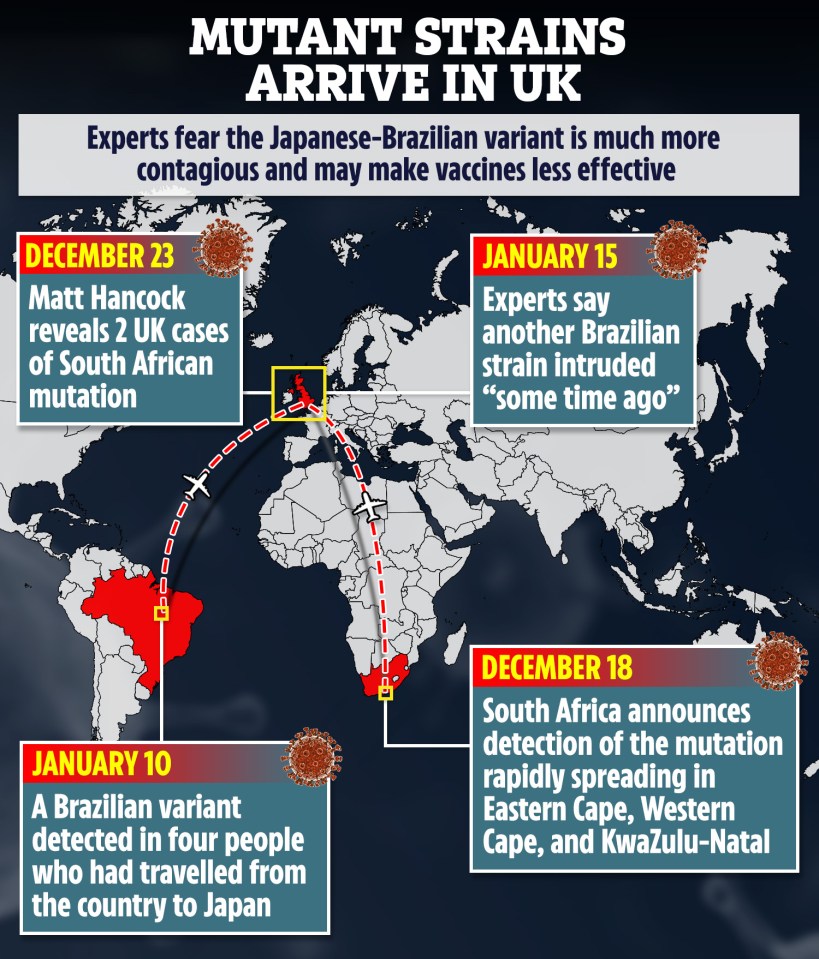 Although early indications are that vaccines will work, experts say it is still too early to be sure if they will be effective against the Brazilian and South African variants, while it is thought they will work against the UK variant.

Nevertheless a new coronavirus jab could be manufactured within just 30 to 40 days if a variant of the virus is found to be less responsive to the vaccines available, according to Nadhim Zahawi, vaccine development minister.

He told the Commons Science and Technology Committee earlier this week that that measures have been put in place to produce the “next iteration” of jabs if needed.

Experts say the new vaccines are essentially like emails that we send to the immune system, and are very easy to tweak.

If the virus has changed, that email simply has to be edited, with a word or two changed, and in a number of weeks a new vaccine will be ready that can better target the new strain.

WHAT DO WE KNOW ABOUT NEW BRAZILIAN VARIANT?

There are two new coronavirus variants emerging in Brazil, with one causing more concern than the other.

The variant that has led to the banning of all flights from South America has not been detected in the UK, while the other mutation has, but is of little concern.

So, what do we know about the new variants?

The Brazilian variant (P1) has three key mutations in the spike receptor binding domain (RBD) that largely mirror some of the mutations experts are worried about in the South African variant.

The coronavirus RBD is one of the main targets for our immune defences and also the region targeted by vaccines. Changes within this region are therefore worrisome.

It is not yet known if the mutation causes more severe Covid-19, but evidence suggests it may be more transmissible.

Porton Down scientists are conducting more analysis to confirm evidence that indicates the strain does not cause any higher mortality rate or that it affects the vaccines or treatments.

It was detected in Brazil and in travellers from Brazil to Japan, and contains a unique constellation of lineage defining mutations.

Like the South African variant, the Brazilian one carries a mutation in the spike protein called E484K, which is not present in the UK strain.

The E484K mutation has been shown to reduce antibody recognition, helping the virus to bypass immune protection provided by prior infection or vaccination.

Scientists analysing the Brazilian variant say the mutations it shares with the South African variant seem to be associated with a rapid increase in cases in locations where previous attack rates are thought to be very high.

They say it is therefore essential to rapidly investigate whether there is an increased rate of re-infection in previously exposed individuals.

The other Brazilian variant (P2)

This one has been detected in the UK, but experts say it is no cause for concern.

It has been reported to be spreading in the Rio de Janeiro State, and is associated with two independent reinfection cases in Brazil, according to the Covid-19 Genomics UK (Cog-UK) consortium.

While it also carries the E484K mutation, it is not currently considered sufficient to designate it as a “Variant of Concern”.

This variant (P2) does not contain the other important mutations carried by the more concerning variant (P1).

According to Cog-UK, although some cases of the P2 have been detected in the UK, other variants with this mutation have also been observed.

Cog-UK said that as of January 15, 11 cases of the variant had been detected in the UK.

Analysis of both variants is ongoing.

Asked at the press briefing whether he thought the Brazilian variant was now in the UK, Sir Patrick said: “There are only two major ones from Brazil, one of them which is particularly important contains two changes: one at 484 and one at 501, so two positions in the genetic sequence.

“That one has not yet been detected in the UK as far as I’m aware, but we’ve got to keep monitoring carefully and it could of course come from any place around the world.”

He added: “These are changes I should expect to start seeing in lots of places, these are changes which this virus quite likes and I think we’ll see them emerging in different places.”

The PM stressed that once the most vulnerable have been vaccinated by mid-February “we will think about what steps we could take to lift the restrictions”.

He continued: “What we can’t have is any false sense of security so that we, as it were, lift the restrictions altogether and then the disease really runs riot in the younger generations.

“That is not to say that I don’t want to try to get to relaxations as soon as we reasonably can – but there are a lot of things that have to go right.”

Asked why the border controls were only being introduced now, the Prime Minister said: “What we’re doing now is taking steps that you’d expect to protect against the new variants because the situation now is we have a very high rate of domestic infection in the UK combined with a massive vaccination programme.

“There’s going to come a point we hope in the next few weeks and months when the vaccination programme will really start to take an effect and that effect will be that so many people are vaccinated you do start to see a decline in the death rate and that will be incredibly important and encouraging when it happens.”

Following the PM’s announcement tonight, arrivals from every country must self-isolate for at least five days.

He said: “It’s precisely because we have the hope of that vaccine and the risk of new strains coming from overseas that we must take additional steps now to stop those strains from entering the country.

“Yesterday we announced that we’re banning flights from South America and Portugal and to protect us against the risk from as-yet-unidentified strains we will also temporarily close all travel corridors from 0400 on Monday.”

OUT WITH A BANG


Can you spot the mountain lion hiding among rocks ready to ambush its prey?

People arriving in the UK from a destination with a travel corridor are currently exempt from the 10-day quarantine requirement.

The new policy means arrivals from every destination will need to self-isolate for 10 days, or receive a negative result from a coronavirus test taken at least five days after they enter the UK.

It had already been announced that travellers arriving in England and Scotland from Monday will need to have a negative test taken up to 72 hours before leaving the country of departure.