BRITISH boxing is back and so are armchair matchmakers and forum masterminds.

The behind-closed-doors show Frank Warren and BT Sport hosted last Friday, to signal the end of boxing’s COVID-19 lockdown, means we can all start dreaming up sensational showdowns again.

The moneymen in boxing – who are often most guilty of delaying or denying us the best bouts – have made big promises about one-sided, voluntary defences and warm-ups being axed for eternity and puffed up six-hour shows being consigned to history.

Boxing’s new future – we have been assured – is going to be the very best against the very best, for the most money and most prestigious belts.

So spend your furloughed days in dreamland, thinking up the most magnificent meetings, while away the last few months of summer plotting fantasy fight cards.

We have had a go, involving some of the best British talent around. Because we can all dream, can’t we.

One quiet day in June, AJ’s promoter Eddie Hearn set the internet ablaze with the news the financial terms of this potential barnstormer had been agreed – but so many hurdles are in the way.

Watford’s WBA, IBF and WBO king has to hold off mandatory challenges from Kubrat Pulev – who he could fight on a boat – and potentially Oleksandr Usyk, while the Gypsy King must first deal with a Deontay Wilder trilogy and Dillian Whyte’s long-overdue shot at his WBC crown. 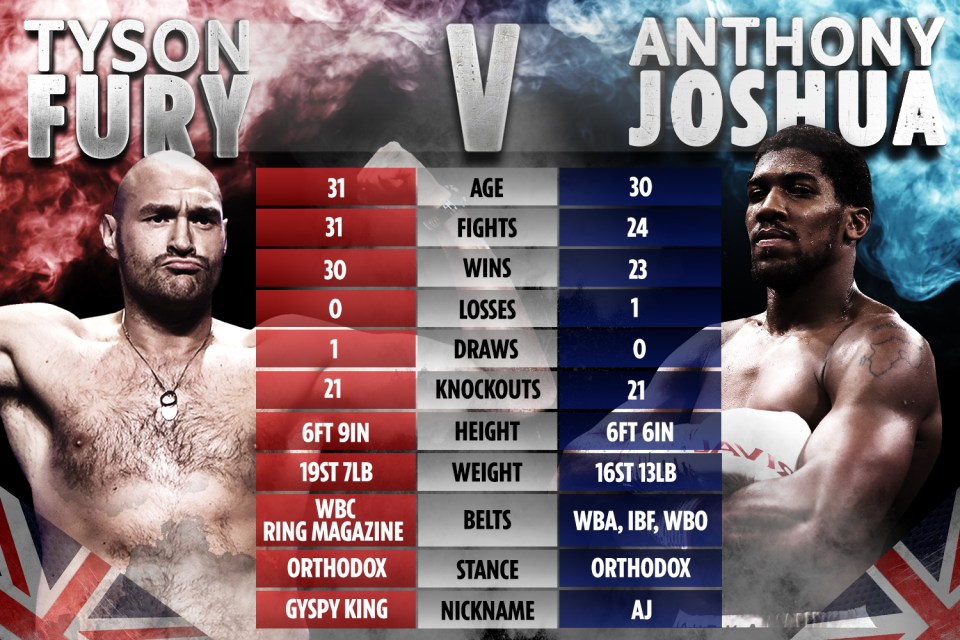 Throw into the fire bitter rival promoters and broadcasters in the UK and America, as well as the fall-out from the COVID-19 pandemic, and the odds are stacked against you.

But the English pair regularly chat on FaceTime and now share star rankings in the popularity stakes, so a 50-50 winner-takes-all showdown and the scheduled rematch should be dreamed about with genuine hope.

British boxing fans were set to be in for another huge treat in seeing the undisputed cruiserweight king and 2012 Olympic champion fight again in England, before lockdown ruined the May show.

But resurgent ‘War’ Chisora – who recently confirmed a switch to MMA – appears to be staying fighting fit and motivated to offer up the Ukraine icon a horrible welcome back to these shores.

Usyk’s first and only venture up from the 14st 4lb division returned a comfortable yet underwhelming win against poor opposition in October, over seven long-seeming rounds.

And coming up against an 18st career-heavyweight in seven-year banger Del Boy will be a hellish test for the supremely talented southpaw.

It’s a genuine shame that John Ryder is not on this list as it looked to a lot of people like he went to Smith’s Liverpool backyard in November and stunned him on points, only to be denied by judges.

So hopefully the Islington man gets the mega-money Canelo fight Saunders has just quit on.

With 29-0 Saunders’ actions outside costing him any mainstream support, the only real desire to see him in action is from his loyal fans who are desperate to know if he can fulfil his limitless potential.

The southpaw is a magnificent talent, who lacks more stellar names on his record and more world titles because of a lack of discipline.

Giant Smith has shown glimpses of excellence, which combined with his 6ft 3in frame should make for a dominant multi-weight boss, but the Ryder performance has left a few questions around the classy operator.

These Brits also share Matchroom boss Eddie Hearn as their promoter and Sky as their broadcaster so little stands in the way, especially now Canelo is on a different path.

Respected Victor Postol was dismantled in 2018, American prospect Ryan Martin was easily stopped next, then feared Ivan Baranchyk was dominated, before Regis Prograis was edged out in a crowning Fight of 2019 contender.

Taylor, 29, now owns the WBA and IBF titles while his 27-year-old Mexican counterpart has the WBC and WBO versions after 25 fights.

Ramirez has already stated he would happily travel to the UK for the clash but both men are likely to have mandatory defences before the ultimate battle in their division.

But the fact they share Top Rank as their promoter should help grease the wheels on a fantastic battle and Taylor has shown all the early signs of getting another iconic win.

Hull’s Olympic 2012 hero does not want your pity but he definitely deserves it.

And now, with the WBC playing around with the demeaning ‘franchise’ champion – as well as naming belt holders in recess and interim status – the 32-year-old is stuck in a dismal limbo.

But Haney visited London last year and seemed eager to face Campbell and they both share a promoter in Hearn, who will know the UK vs US show makes great pounds, dollars and sense.

The WBC did order Campbell to face Mexico posterboy Ryan Garcia recently but that money-spinner now also looks to have flatlined.

Campbell wants to hand out a battering to win a genuine world title, not wait patiently to be handed a paper one.

Since the Leeds legend won his IBF featherweight crown from Lee Selby in May 2018, all he has wanted to do is throw it in the pot up against another champion to unify.

Agonisingly, high-profile names like Leo Santa Cruz, Oscar Valdez and, most recently, Shakur Stevenson have all vacated their titles and moved up a weight.

That leaves only WBC ace Gary Russell Jr on the table and he only likes to fight once a year, against cherry-picked opponents, racking up just five defences since winning the title in 2015.

While the 29-year-old Yorkshireman can still make the 9st mark comfortably, he should not be forced to step up.

So the hope for late 2020 or early next year is that another serious champion is installed or recognised so the father-of-two can start planning a lucrative exit plan from the brutal game.

Unlike all of the previous match-ups, this is a massive longshot, even in a post-coronavirus age when promoters and broadcasters are promising fans that the best bouts will no longer be over-cooked and dragged out.

Buatsi is promoted by Hearn and broadcast by Sky Sports. Yarde is looked after by Frank Warren and one of BT Sport’s main men.

Neither of the Londoners have a world title to put on the line, so it wouldn’t be a massive money spinner yet and both stand-up fellas are too decent to insult or trash the other, to create fake hype.

Most read in Boxing

The division’s top two stars – Russian beasts Artur Beterbiev and Dimitry Bivol – are likely to clash a couple of times soon to hopefully decide at least three titles – so both Englishmen will be looking for high-profile bouts.

It would take a succession of miracles, flukes and granted wishes, however, to get this clash made before at least one of the homegrown talents has a major title.

But who knows what the magical, mystery world of post-lockdown boxing will throw up.

MANNY PACQUIAO has been backed by one of his...
Read more
Boxing

JOSH WARRINGTON has been asked by a fan on...
Read more