THE UK could face a further 50,000 coronavirus deaths before the virus burns out, one Sage adviser has warned.

It comes after Prime Minister Boris Johnson said he was “deeply sorry” after figures released yesterday showed that 100,000 people have now died from Covid-19 in the UK.

A top scientific adviser has now warned that Brits aren’t out of the pandemic yet and added that another virus similar to this could plague the world in years to come.

Appearing on BBC Newsnight, Professor Calum Semple said: “It would really not surprise me if we’re looking at another 40,000 or 50,000 deaths before this burns out.

Prof Semple also praised the work of healthcare workers across the country who have now been fighting this pandemic for almost a year.

He added: “We are absolutely not out of this.”

Prof Semple was also asked whether he thought this would be a “once in a generation crisis”, to which he responded: “I suspect in the next 20 years we will see something similar to this, albeit not on the same scale.” 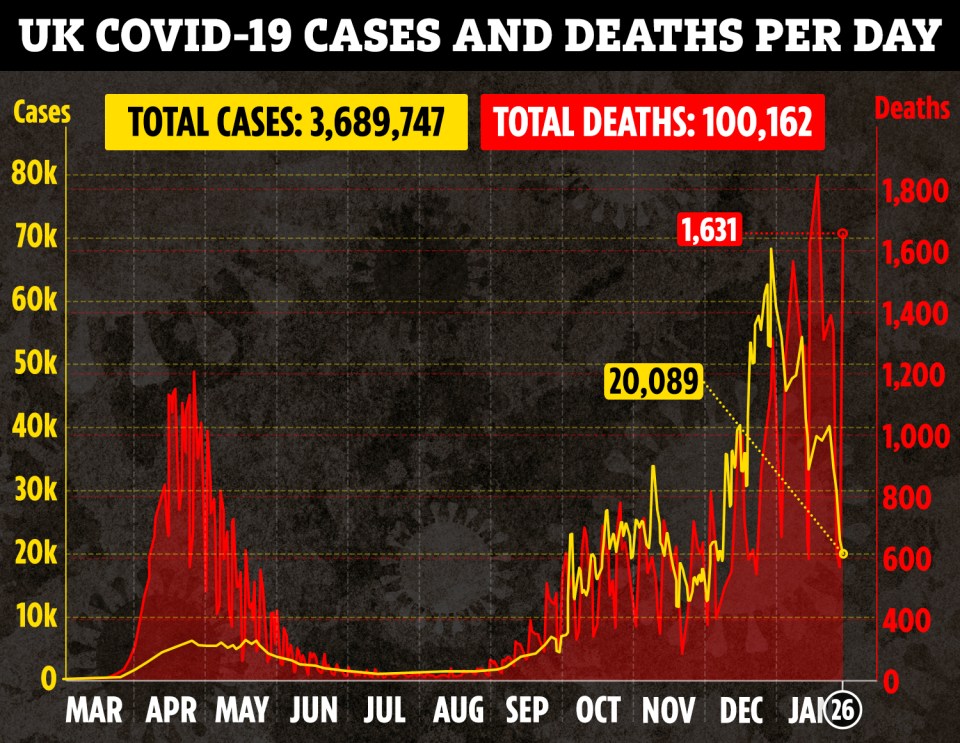 His comments come after estimated from the Office for National Statistics (ONS) revealed that deaths in the UK had topped 100,000.

New data shows there have been 103,704 fatalities in England and Wales linked to the virus since the pandemic began.

The ONS reported a total of 7,245 new deaths from the week ending January 15 which mentioned Covid-19 on death certificates.

This is a jump from 6,057 fatalities the week before, and is the highest weekly figure since the week ending April 24 in the first wave.

More than a third of all deaths registered in England and Wales in the second week of January were linked to Covid – the highest proportion recorded since the pandemic began.

The number of deaths registered in that week was 30.5 per cent above the five-year average.

'HE WAS JUST A BABY'


Tributes to boy, 15, stabbed to death 'on way to fish and chip shop'


Sen. rushed to hospital HOURS after being sworn in to oversee Trump impeachment

Nearly three-quarters of deaths involving Covid were in people aged 75 years and over.

Mr Johnson said the huge death toll “exhausts the thesaurus of misery” and represents “an appalling and tragic loss of life”.

The PM last night announced: “I’m sorry to have to tell you that today the number of deaths recorded from Covid in the UK has surpassed 100,000.

“It’s hard to compute the sorrow contained in that grim statistic – the years of life lost, the family gatherings not attended, and for so many relatives the missed chance even to say goodbye.”