JOSHUA Kushner is the founder and managing partner of the investment firm Thrive Capital and is married to model Karlie Kloss.

He is also the brother of Jared Kushner, the son-in-law of Donald Trump.

Who is Joshua Kushner?

The 35-year-old graduated from Harvard College in 2008 and Harvard Business School in 2011, however, Joshua reportedly only gained admission thanks to his father’s $2.5million donation.

While still a junior at Harvard, Joshua started Vostu, a company that makes video games for social networking sites.

Josh and Karlie were married in 2018[/caption]

When those business ventures began to falter, he started investing in upcoming tech companies.

He started dating supermodel Karlie Kloss in 2012 and in July 2018, took to Instagram to announce their engagement with the simple caption “fiance.”

They would marry that same year.

His older brother Jared wed Ivanka Trump in 2009 and is currently a senior advisor to US President Donald Trump.

What is his relationship with Jared?

Josh is the younger brother of Jared, who is 39.

They have two sisters – Dara and Nicole.

“It is no secret that liberal values have guided my life and that I have supported political leaders that share similar values,” Joshua told Forbes in 2017.

“But neither political party has a monopoly on the truth or on constructive ideas for our country. 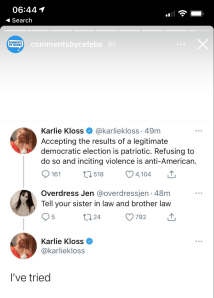 “It’s important to be open-minded and learn from differing opinions.”

It is believed that Joshua and wife Karlie have similar political views.

Karlie commented on the unrest and violence in Washington that saw many Republicans try to challenge Joe Biden’s election win.

“Accepting the results of a legitimate democratic election is patriotic,” she wrote on social media.

“Refusing to do so and inciting violence is anti-American.”

Someone responded that she should tell her sister-in-law and brother-in-law, referring to Ivanka Trump and Jared Kushner.

What’s his net worth?

Joshua comes from a wealthy, real-estate focused family but he has also forged his own path into the tech industry.

This has left the businessman with an estimated net worth of $800 million.

His family’s combined fortune of an estimated $1.8 billion already meant he would never have to work a day in his life.

Despite this, he has made a career out of inventing Thrive Capital’s money into successful technology firms such as Instagram, Slack, and Instacart.

He is also the founder of insurance company Oscar Health and in 2015, he launched Cadre with his brother Jared which is worth around $25 million in its own right.

Most Read in News


Who was Ashli Babbitt? Woman reported to be shot dead during Capitol Hill march

TOO LITTLE TOO LATE

What does Thrive Capital do?

Thrive Capital is a private equity and venture capital firm that focuses on media and technological investments.

It has invested in upward-trending companies such as Instagram, Spotify, and Slack.